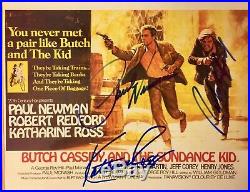 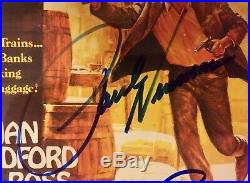 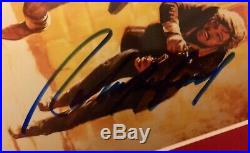 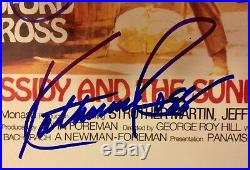 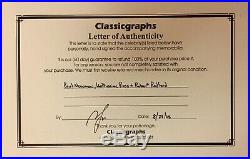 Autographed 8×10 promo poster of. BUTCH CASSIDY AND THE SUNDANCE KID Actors Paul Newman, Robert Redford and Actress. Butch Cassidy and the Sundance Kid. Is a 1969 American Western film directed by George Roy Hill and written by William Goldman. Based loosely on fact, the film tells the story of Wild West outlaws Robert LeRoy Parker, known as Butch Cassidy (Paul Newman), and his partner Harry Longabaugh, the “Sundance Kid” (Robert Redford), who are on the run from a crack US posse after a string of train robberies. The pair and Sundance’s lover, Etta Place (Katharine Ross), flee to Bolivia in search of a more successful criminal career. In 2003, the film was selected for the United States National Film Registry by the Library of Congress as being culturally, historically, or aesthetically significant. ” The American Film Institute ranked Butch Cassidy and the Sundance Kid as the 73rd-greatest American film on its “AFI’s 100 Years… 100 Movies (10th Anniversary Edition) list. Butch Cassidy and the Sundance Kid were ranked 20th greatest heroes on AFI’s 100 Years… 100 Heroes and Villains. Butch Cassidy and the Sundance Kid was selected by the American Film Institute as the 7th greatest Western of all time in the AFI’s 10 Top 10 list in 2008. (January 26, 1925 September 26, 2008) was an American actor, film director, producer, race car driver, IndyCar owner, entrepreneur, and philanthropist. A BAFTA Award, a Screen Actors Guild Award, a Cannes Film Festival Award, an Emmy Award, and many others. Newman’s other roles include the title characters in The Hustler (1961), Hud (1963), Harper (1966) Cool Hand Luke (1967), Butch Cassidy and the Sundance Kid (1969), The Life and Times of Judge Roy Bean (1972), The Sting (1973), Slap Shot (1977), and The Verdict (1982). He voiced Doc Hudson in the first installment of Disney-Pixar’s Cars as his final acting performance, with voice recordings being used in Cars 3 (2017). Newman won several national championships as a driver in Sports Car Club of America road racing, and his race teams won several championships in open-wheel IndyCar racing. He was a co-founder of Safe Water Network, a nonprofit that develops sustainable drinking water solutions for those in need. In 1988, Newman founded the SeriousFun Children’s Network, a global family of summer camps and programs for children with serious illness which has served 290,076 children since its inception. Charles Robert Redford Jr. (born August 18, 1936) is an American retired actor, director, producer, and businessman. He is the founder of the Sundance Film Festival. Redford began acting on television in the late 1950s, including an appearance on The Twilight Zone in 1962. He earned an Emmy nomination as Best Supporting Actor for his performance in The Voice of Charlie Pont (1962). His greatest Broadway success was as the stuffy newlywed husband of co-star Elizabeth Ashley’s character in Neil Simon’s Barefoot in the Park (1963). Redford made his film debut in War Hunt (1962). His role in Inside Daisy Clover (1965) won him a Golden Globe for the best new star. He starred alongside Paul Newman in Butch Cassidy and the Sundance Kid (1969), which was a huge success and made him a major star. He had a critical and box office hit with Jeremiah Johnson (1972), and in 1973 he had the greatest hit of his career, the blockbuster crime caper The Sting , a re-union with Paul Newman, for which he was nominated for an Academy Award. The popular and acclaimed All the President’s Men (1976) was a landmark film for Redford. In 1973 Redford starred opposite Barbra Streisand in The Way We Were. In the 1980s, Redford began his career as a director with Ordinary People (1980), which was one of the most critically and publicly acclaimed films of the decade, winning four Oscars including Best Picture and the Academy Award for Best Director for Redford. He continued acting and starred in Brubaker (1980), as well as playing the male lead in Out of Africa (1985), which was an enormous box office success and won seven Oscars including Best Picture. He released his third film as a director, A River Runs Through It , in 1992. He went on to receive Best Director and Best Picture nominations in 1995 for Quiz Show. He received a second Academy Awardfor Lifetime Achievementin 2002. In 2010, he was made a chevalier of the Légion d’Honneur. He has won BAFTA, Directors Guild of America, Golden Globe, and Screen Actors Guild awards. In April 2014, Time magazine included Redford in their annual Time 100 as one of the “Most Influential People in the World”, declaring him the “Godfather of Indie Film”. In 2016, he was honored with a Presidential Medal of Freedom. (born January 29, 1940). Is an American film and stage actress. She had starring roles as Elaine Robinson in The Graduate (1967), for which she received a nomination for the Academy Award for Best Supporting Actress; as Etta Place in Butch Cassidy and the Sundance Kid (1969), for which she won a BAFTA Award for Best Actress; and as Joanna Eberhart in The Stepford Wives (1975). She won a Golden Globe for Voyage of the Damned (1976). The item “BUTCH CASSIDY AND THE SUNDANCE KID Cast Autographed 8×10 Promo Poster withCOA” is in sale since Sunday, December 22, 2019. This item is in the category “Entertainment Memorabilia\Autographs-Original\Movies\Photographs”. The seller is “amaharr61″ and is located in Batesburg, South Carolina. This item can be shipped worldwide.