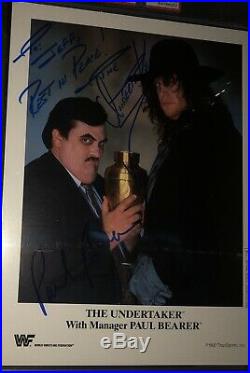 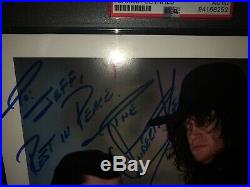 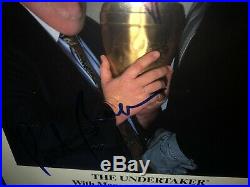 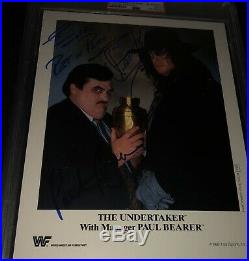 Offered here is A Very Rare Dual Signed Vintage WWF 1992 Color Promo 8×10 Photo authenticated and encapsulated by PSA/DNA the leading 3rd party Authenticator. A true rarity, a gem and amazing addition to any collection. Mark William Calaway (born March 24, 1965), better known by the ring nameThe Undertaker, is an American professional wrestler currently signed to WWE. Widely regarded as one of the greatest professional wrestlers of all time, [7]Calaway began his career in 1987, working under various gimmicks for World Class Championship Wrestling(WCCW) and other affiliate promotions. After signing for World Championship Wrestling (WCW) in 1989, he enjoyed a brief stint as a mid-card performer named “Mean Mark” Callous, prior to joining the World Wrestling Federation (WWF, now WWE) in 1990. In WWE, Calaway was rebranded as “The Undertaker” and gained significant mainstream popularity as a horror-themed, macabre entity who employed scare tactics and held links to the supernatural. The Undertaker became one of the most prominent figures of the Attitude Era, featuring in various pivotal storylines and matches as WWF sustained a boom period in business in the late 1990s. His character transitioned into a biker in the early 2000s, before returning to a refined version of his previous gimmick in 2004. The Undertaker is known for The Streak, a series of 21 straight victories at WWE’s flagship annual event, WrestleMania. Calaway has held 17 championships. Within WWF/E, he is a four-time WWF/E Champion, a three-time World Heavyweight Champion, a six-timeWWF World Tag Team Champion, a one-time WWF Hardcore Champion, and a one-time WCW Tag Team Champion(during the Invasion angle). Outside of WWE, a one-time USWA Unified World Heavyweight Champion and a one-time WCWA Texas Heavyweight Champion. The Undertaker has headlined multiple pay-per-view (PPV) events for WWE, including four WrestleManias (13, XXIV, XXVI and 33). He is also the second most prolific pay-per-view performer in WWE history, wrestling in 172 matches, behind his storyline brother, Kane. William Alvin “Bill” Moody (April 10, 1954 March 5, 2013) was an American professional wrestling manager and mortician. He is best known for his tenure with the World Wrestling Federation (WWF, later WWE) where he performed under the ring name Paul Bearer as the manager of The Undertaker. He later managed wrestlers such as Mankind and Bearer’s storyline son, Kane. Outside WWE, he was known by the name Percival “Percy” Pringle IIIand performed in various regional territories and promotions, as well as World Class Championship Wrestling(WCCW). The item “UNDERTAKER PAUL BEARER Dual Signed WWF Promo 1992 8×10 Photo PSA WWE AUTO” is in sale since Sunday, December 8, 2019. This item is in the category “Sports Mem, Cards & Fan Shop\Autographs-Original\Wrestling\Photos”. The seller is “lilybethtaylor37″ and is located in Houston, Texas. This item can be shipped worldwide.